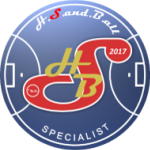 The Spaniards won the trophy match against Italy. Argentina claimed the bronze medal in front of Russia. 9 quota places for the Buenos Aires 2018 Youth Olympic Games were allocated.

In an unbelievable final game, Spain beat Italy 2:1 (27:24, 18:24, SO 7:6) to hang the gold medal around their necks. The match went to shoot-out, where the Hispanos showed bigger temple and raised the trophy.

In the previous turn, Argentina won the bronze medal match in the shoot-out versus Russia (14:18, 17:16, SO 8:5). It was the nation’s second medal in the history of handball in all age categories and both indoor and beach — after the ladies earned the first one against Portugal only minutes before.

According to the IHF Men’s U17 Beach Handball World Championship final rank, the following national teams have claimed the right to a Buenos Aires 2018 Youth Olympic Games continental quota place:

(*) The 10th quota place is still to be allocated by the International Olympic Committee (IOC). As hosts, Argentina could choose one category to participate in and they picked the women’s.

Any cookies that may not be particularly necessary for the website to function and is used specifically to collect user personal data via analytics, ads, other embedded contents are termed as non-necessary cookies. It is mandatory to procure user consent prior to running these cookies on your website.